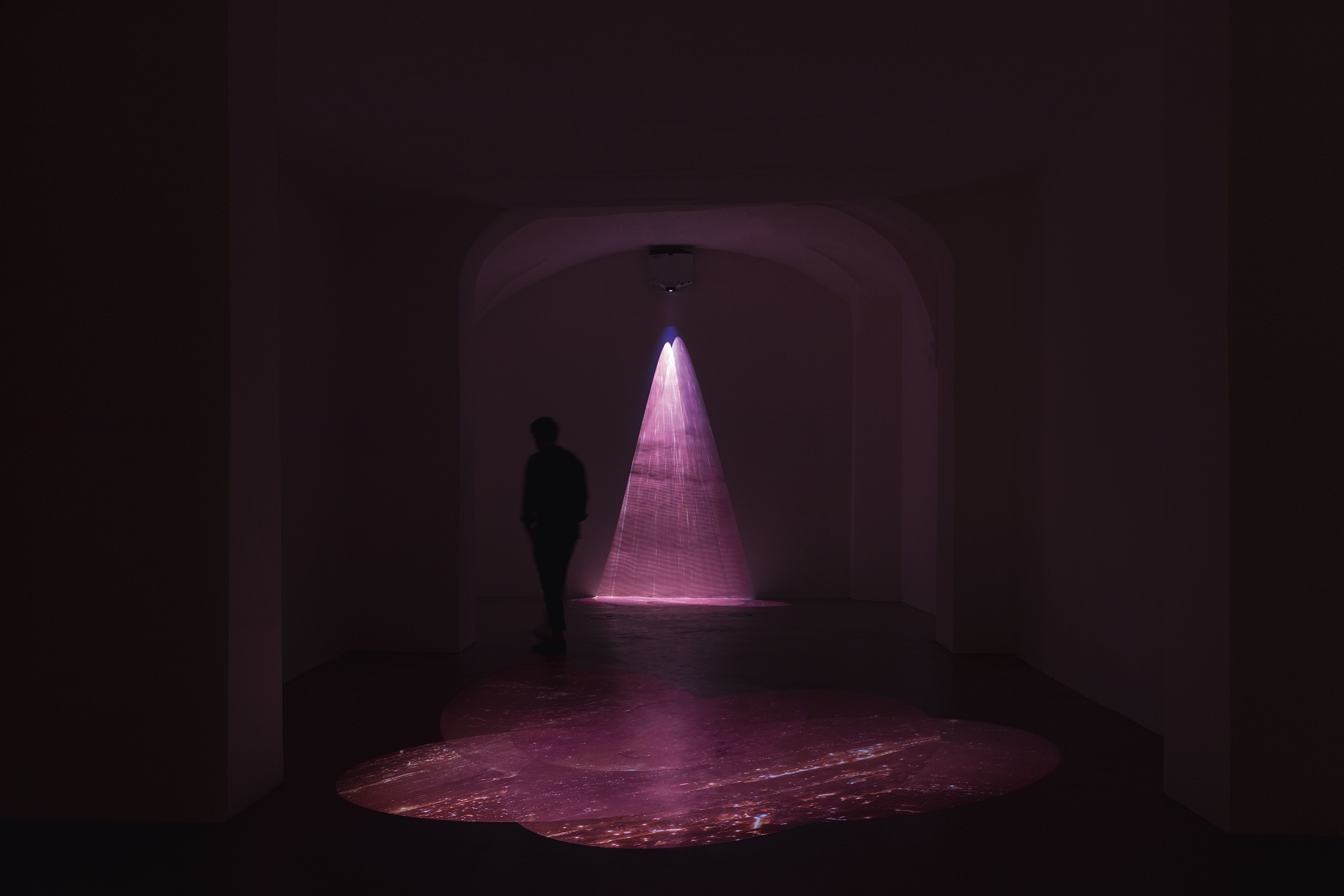 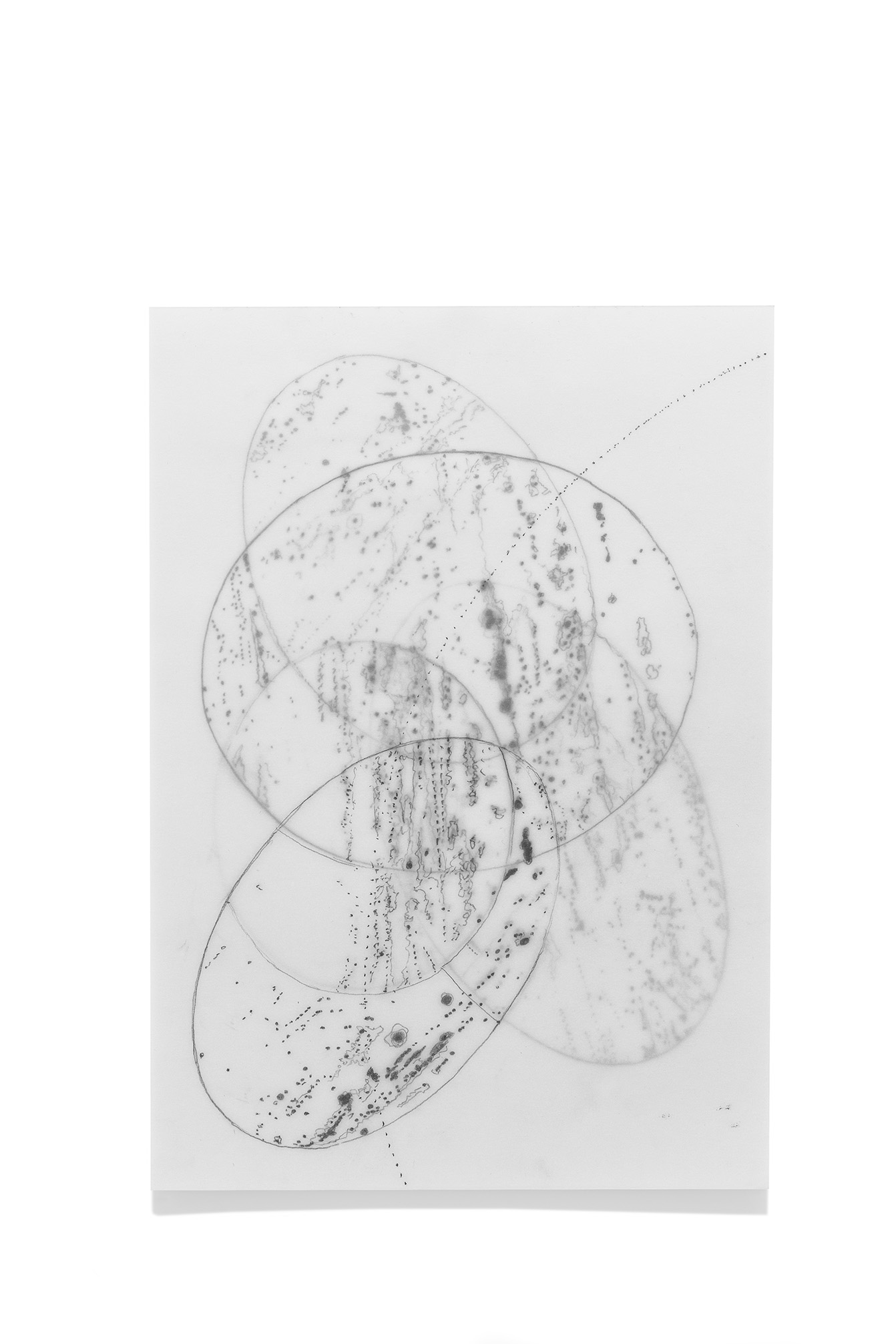 After studying at the Academy of Fine Arts in Bologna, Grazia Toderi moved to Milan in 1992 and since 2005 has divided her time between Milan and Turin. The artist first gained critical attention in part as a result of her participation in Aperto ’93 at the 45th Venice Biennale, where she exhibited, in addition to photographs, the video Notiscordardime (Forget-me-not), where she used a fixed video camera to shoot a small plant assailed by a violent and continuous jet of shower water. Toderi tends to make detached recordings of actions that often unfold in an everyday environment, and her deliberately elementary use of video as an expressive means emphasizes her desire to concentrate on the subject and the action taking place, distancing herself from pure and simple creative will. All shot with a fixed video camera, the subjects of these early works are, in fact, very simple: one video, for example, shows the head of a large doll beaten by the windshield wiper of a car (Mia testa, mio cuore [My head, my heart], 1993), while the same doll is again shot in Soap, 1993, this time in circular motion inside a washing machine. While showing quotidian objects in domestic contexts, Grazia Toderi’s works do not hide a sense of unease, and her subjects, in reality, are often subjected to concealed violence. In 1995, invited to exhibit at Frac Languedoc-Roussillon in Montpellier, the artist herself became the protagonist of a video, Zuppa dell’eternità e luce improvvisa (Soup of Eternity and Improvised Light), 1994, where, negating the force of gravity, she attempted, while completely immersed in a swimming pool, to carry out normal actions such as walking or opening an umbrella. The slowness of the action seems to unfold following the rhythm of her breathing that, through the image, reveals all the exertion of the hostile situation to which the body is subjected.

From absence of gravity and washing machine windows, the artist’s everyday microcosm has gone on to become a means to convey the sentiments of an entire generation, one that grew up through images broadcast on television. Nata nel ’63 (Born in ’63) and Prove per la luna (Attempts for the Moon), both 1996, describe the emotion of the first moon landing, seen through the eyes of those who followed it, mediated by a screen that unified millions of people throughout the world. Her focus on the disseminative capacity of this means and its communicative potential are also evident in works such as Il decollo (The Takeoff), 1998, where the image – again extracted from the world of television – of a stadium shot from above is made to turn slowly, to a background accompaniment of the babble and chorus of voices, once again emphasizing the unifying power, not only of the televisual image, but also of the spectacle in and of itself. Toderi looks at this means of communication in positive terms, not interpreting it as a vehicle that encourages the standardization of sentiments, but rather capturing its unifying aspect and its symbolic value for an entire generation.

In recent years Toderi has participated in numerous important group exhibitions, in addition to having solo exhibitions in museums and exhibition spaces such as Frac Bourgogne in Dijon, Casino Luxembourg in Luxembourg, and Castello di Rivoli Museo d’Arte Contemporanea.

Always fascinated by the use of images taken from already existing shots and from the dynamics of spectacle, which she understands as an occasion for encounter and coming together, Toderi works on images of stadiums, arenas and large historical theaters. In Eclissi (Eclipses), 1999, Random, 2001, and Orchestra, 2003, the audiences in various Italian theaters become an occasion for reflection on the relationship between container and contents, use and user, in a play of parts that, in the end, turns the public into a protagonist. The realization of the audience, recreated with the help of digitally manipulated images to which applause, background babble and bursts of flashes are added, serves only to underscore the artist’s focus on the public, which she considers the real protagonist of performance.

Toderi also has made a series of videos that, using aerial images, recreate nighttime views of cities such as Rome, Florence and London. These works explore the cities, following a viewpoint completely different from the usual one, where the artist, thinking of Italo Calvino’s Invisible Cities, conceives of the city as a mirroring between sky and earth. La pista degli angeli (The Trail of Angels), 2000, Firenze, stelle di terra (Florence, Stars of Earth), 2000, Mirabilia Urbis, 2001, Città invisibile (Invisible City), 2003, London, 2001, are all works where the view from above of known places transforms them into magical and mysterious territories.

In addition to her participation in numerous exhibitions, Toderi has recently created various special projects, such as a collaboration with Virgilio Sieni’s Dance Company, where she created the sets for the performance Il fiore delle 1001 notte (The Flower of 1001 Nights), 1998, which was one of the winners of the Golden Lion award at the 1999 Venice Biennale, and the installation Audience, presented on the occasion of the opening of the Museo Nazionale del Cinema in the Mole Antonelliana in Turin in 2000. In 2001 Grazia Toderi was awarded a fellowship from the Supporting Friends of Castello di Rivoli, as a result of which she spent a period of time in the United States, resulting in the creation of works that focus on large American stadiums (Subway Series, 2001, Diamante [Diamond], 2001, Super Tuesday, 2001), and on an image of the United States seen from above (Empire, 2002). In 2004 she created the video Semper eadem for the reopening of the Teatro La Fenice in Venice, and in 2006 she had a solo exhibition at P.A.C. in Milan. In 2009 she has been invited to participate in the exhibition Fare Mondi / Making Worlds…, at the Venice Biennale, for which she has created Orbite Rosse (Red Orbits), a double video projection in which lights of distant cities appear in continuous transformation, and there are two large ovals, an homage both to the ancient tradition of terrestrial and celestial mapping, the planisphere, and to the sockets of our eyes, optical tools that convey images to our head/world.

In 2010 the Museum Serralves in Porto opened her solo exhibition with a new double video projection titled Atlante, (Atlas, 2010), a new single projection titled Diaframma (Aperture, 2010), and a series of works including Rosso Babele (Babel Red, 2006), Rosso (Red, 2007), Orbite Rosse, (Red Orbits, 2009), and Pulse 60xz, (2009). In that exhibition there was also an important part dedicated to drawings and paintings, made on paper or laminil, using graphite, metals and melted tin.

In April 2011 opened a personal show at the Hirschhorn Museum in Washington, D.C., and in October 2012 a personal show at MAXXI, in Rome for wich she realize a new version, a double projection of Mirabilia Urbis. She was invited in 2013 by the Perth International Arts Festival to present a solo exhibition at the John Curtin Gallery in Perth (Australia). In 2014 she dedicated a new work to the Offertorium K. 222 by Mozart, that was installed, in collaboration with MAMbo, at Museo internazionale della Musica di Bologna. In 2016 she ended a long project realized in collaboration with Orhan Pamuk, ”Words and Stars”: a special projection made for the Planetarium in Torino, an installation for Palazzo Madama in Torino, and a trilogy composed of eight projections at MART in Rovereto (2017).